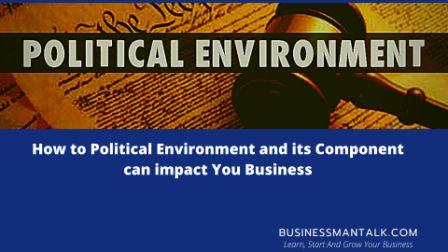 Introduction to the Political environment.

For a systematic study of the political system, a business firm should, first of all, analyze the national constitution, major political parties, form or structure of government, the mechanisms designed to guide a transition of power from one leader to the next, key power blocks, and the extent of popular support.

Let’s talk about the Components of Political environment.

They refer to the set of ideas ‚ principles and philosophy which are concerned with the allocation of power and offer political and cultural outlook. The major political ideologies are democratic and totalitarian.

It is a fundamental guideline or law under nation functions. It affects the development of business in the country directly. The major directive principles stated by the constitution are:

Political parties are the building blocks of a democratic system. They act as representatives of people and address their problems. Through legislation‚ they attempt to form a government and rule the nation according to their ideology and policies.

Government and Its Branches

Businessman Talk is a online publisher focusing learning resources, news stories about entrepreneurship, small business management, and business. We specifically report on the business related news, analysis of emerging trends in business and entrepreneurship, and profiling of new businesses and products. Read More

Scroll back to top